Time for a break from winter, so a few of us headed down to Arizona, expecting  to find warm rock to climb. It wasn’t to be, although we did manage to squeeze in 3 days of climbing before the snow arrived. This was my first visit to Cochise Stronghold, and was impressed by the area. The climbs seemed hard for the grade, but maybe it was partly because this was my first time on rock in a few months. We climbed at the West Stronghold, and I sampled three of the areas near the camping area – Sweet Rock, Trad Rock on Isle of Ewe (You) and an unknown rock just northwest of Sweet Rock. Luckily I was with a group of strong climbers or I wouldn’t have climbed as many routes as I did!

Since this was a two week trip I’ve divided the photos into several trip segments.

Click on the photo below to see a slideshow of this section of the trip. 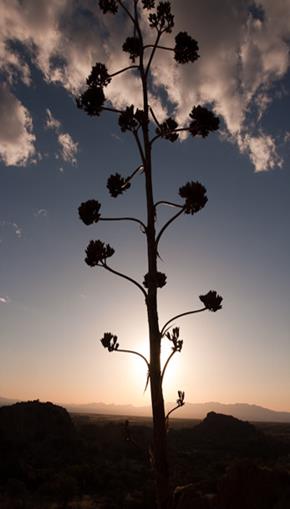 After the snow, great for photography but not for climbing, it was time to move on to Mt. Lemmon to sample some of the climbing there. It turned out that skis would have been more appropriate than rock shoes, and several of out party headed home early. I stayed one more day and we had a wet but enjoyable visit to Saguaro National Park. My first visit to the Sonoran Desert, I was definitely impressed.

Click on the photo below for a slideshow of this segment of the trip. 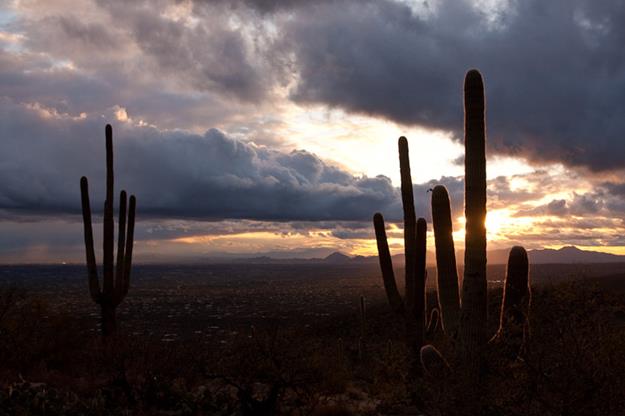 Still cold the next day, I decided to head south, to Organ Pipe Cactus National Monument. On arriving there, I immediately felt as if I had entered a war zone. Much of the Monument was closed, due to illegal border activity. Only two side roads were open, North Puerto Blanco Drive and Ajo Mountain Drive. The latter was important to me since I was planning to climb Mt. Ajo the following day.

I spent the first afternoon checking out North Puerto Blanco Drive, though it was a little unnerving to have Border Patrol officers zipping by on ATV’s while trying to photograph. I spent the evening photographing sunset on Mt. Ajo from the nearby Desert View Trail.

The next morning I was up early for my hike up Mt. Ajo, but on arriving at the gated entrance to the loop road, I was stopped by Border Patrol officers, who informed me that the area was closed due to an on-going “situation”. Apparently a vehicle had just attempted to run the border, the officers had shot out a tire and the occupants had scattered in the direction of Mt. Ajo. I was told to return to the visitor’s center and wait. Some time later they removed the barrier, so I started to drive to the trailhead, only to be stopped a mile further by more Border Patrol officers, heavily armed, with flak jackets. They were standing on the roof of their vehicle, scanning the surroundings for the fugitives. They told me that if I wanted to continue, it was at my own risk, but that they didn’t consider the area to be safe. I decided that it wasn’t worth it and returned to the campground area. When I mentioned to the host that I was going to do an alternate hike, to the Victoria Mine, I was advised to wait until the area was declared safe. This happened perhaps an hour later, so I headed out for a pleasant hike to the mine, approximately 2 miles from the border. I later learned that the area beyond the mine was also considered unsafe. 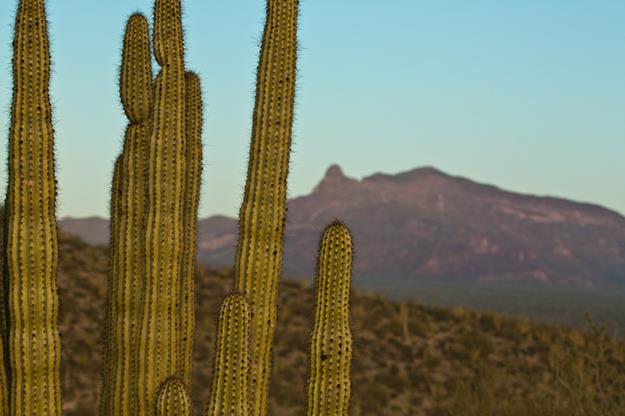 I felt quite uncomfortable here, so decided to head north to climb another peak – Picacho Peak, northwest of Tucson. Arriving at lunchtime, an afternoon hike up this impressive monolith was a welcome change from the forced inactivity of the last few days. Requiring only 3 hours round trip, I had plenty of time to complete the climb (1700 vertical feet and 3.6 miles each way) before the peak closed at sunset.

Sections of the climb have steel cables to aid in ascending and descending the route, so it’s a popular family outing, as you can see from the photos. 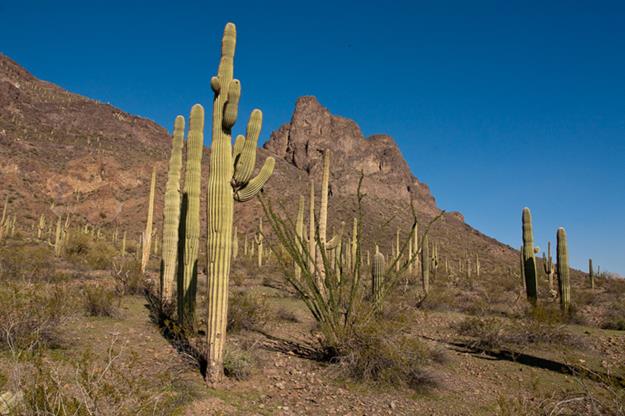 The next morning it was on to Petrified Forest National Park, with a brief stop at Casa Grande National Monument. I didn’t reach the Petrified Forest NP ’til 4pm, only to be informed that the Park closes at 5pm and doesn’t re-open ’til 8am the next morning (these are winter hours, and change during other seasons). Apparently there is much concern about people stealing the pieces of petrified wood, so no visitors are allowed to stay in the Park overnight, except with a backcountry camping permit for the Wilderness area. This was disappointing, since the best time to photograph the area is definitely around sunset and sunrise.

It is still an amazing place to visit, so I rushed around a couple of trails until 5pm, then returned the following morning to see the other areas. 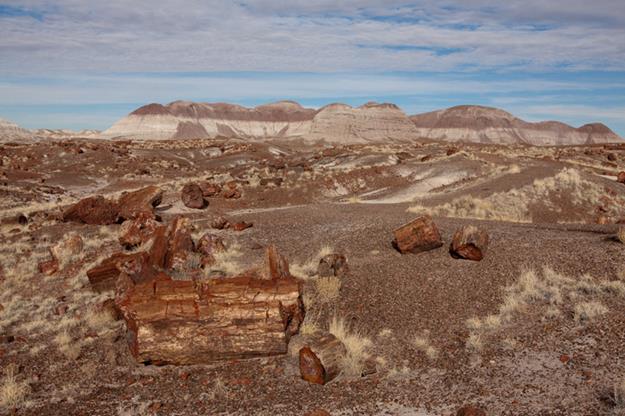 With another snow storm approaching, it was time to head home.